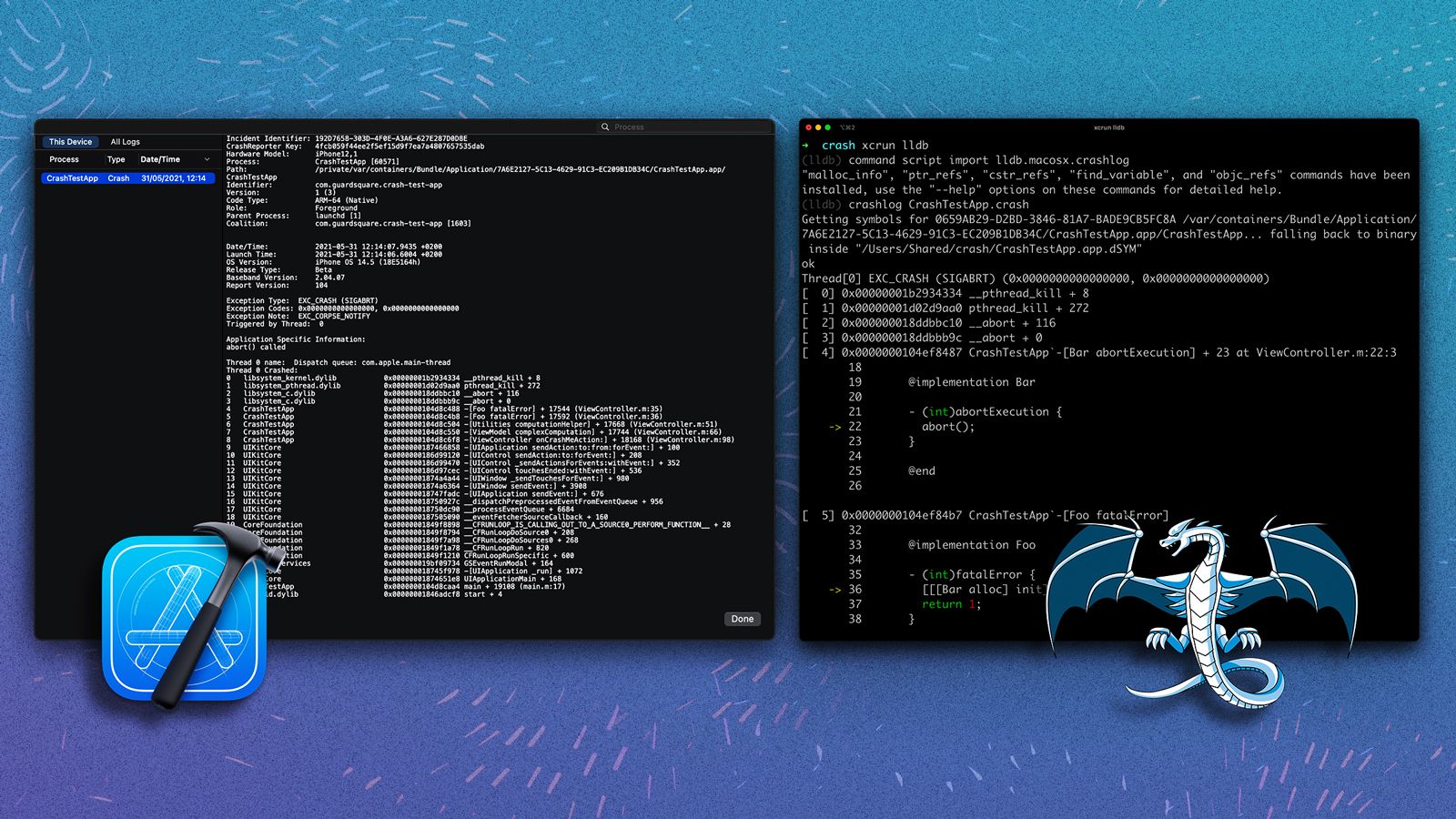 This blog post assumes you are already familiar with Apple crash reports and symbolication. If this is not the case, then it is recommended that you first have a look at Apple’s documentation on crash reports in order to familiarize yourself with the general concepts.

Crash reports are an essential tool for any app developer. They provide detailed information on crashes that occurred, allowing you to efficiently locate and resolve them. By themselves, crash reports only contain memory addresses of code locations involved in the crash. In order to actually map these addresses to more easily comprehensible source code locations, the debug information (thedSYMsfiles) of the app is required. Crash reporting tools use this debug info to map addresses to their corresponding source code locations, such as functions. When using Xcode to view your app’s crash reports, this process is automated.

LLDB is the underlying debugger used by Xcode and a core component of the Xcode toolchain. But LLDB is not just an integrated component of Xcode, it can also be used on its own. The screenshots below show how LLDB is integrated into Xcode, and how it can be used from the terminal on its own to debug the exact same scenario.

Next to debugging, LLDB can also be used to symbolicate crash reports. In fact, it actually does a better job at symbolication than most crash reporting tools, and provides more complete information.

You can symbolicate a crash report with LLDB by running the commands in the steps below:

Launch LLDB from your terminal:

The preceding command script defines the crashlog LLDB command, which can then be used to symbolicate the crash report:

The crashlog command will symbolicate the complete crash report and enrich the stack trace with source code snippets, resulting in a symbolicated crash report.

As we’ve already alluded to in the previous section, LLDB does a better job at symbolicating crash reports than most other tools. More concretely, it provides more complete debugging information on application code compared to other tools.

Xcode 12.1 (and prior versions) is unable to deal with symbolicating crash reports if debug information names exceed a certain limit. Trying to symbolicate crash reports with very long names using these Xcode versions leads to Xcode crashing. In most cases, this should not be an issue since the character limit for debug information names is larger than any sensible name length. However, in some specific cases, this could be a real issue. For example, when using heavily templated C++ code, types can get very long and names can exceed this limit, thus breaking symbolication for crash reports containing such names.

Debug info is used to map addresses within the process back to source code entities. But it is possible that the location of some code in the compiled binary is different from its location in the source code. This is the case for inlined functions, where the function call gets replaced by the body of the called function. This happens essentially by copying the code from the called function into the calling function. In order to make sure that the code can still be traced back to the source location, the inlining also needs to be reflected in the debug information.

For example, this is what an instruction ininlined_function, that was inlined intocalling_function, looks like in a stack trace:


Inlining can be repeated an arbitrary number of times, for example, by successively inlining function calls into code that was already inlined itself. Inlined debug information can also be chained to account for cases of multiple levels of inlining.

LLDB always shows the full inlined debug info chain, while other tools do not show any, or only a single level of inlined debug info. Below we show an extract of the exact same crashlog symbolicated by Xcode and LLDB respectively.


It is clear from the example that Xcode is missing a lot of useful information about the origin of the code in the stack trace. Without this inlined debug information there is no way to know which exact source code corresponds to the frame in the stack trace. In the example above for LLDB, we can clearly see that the code at line 66 caused this particular crash. On the other hand, the stack trace symbolicated by Xcode would lead us to believe that the crash occurred at line 79, which just contains a function call toinlined_function in the source code.

What if LLDB is unable to symbolicate the crash report?

dSYMs could not be found automatically

There are a few common reasons why LLDB might fail to locate the dSYMs:

LLDB is unable to read the crash report

LLDB’scrashlogcommand is only able to read and symbolicate crash report files that adhere to the Apple crash report format. Some crash reporting tools can provide crash reports in other formats, such as BugSnag. Some do not give access to the crash file itself at all, like Firebase Crashlytics. Even in such cases, we can still leverage the full debug information that LLDB presents by performing manual lookups.

This can be done as follows:

First, you need to select the address in the stack trace you want to symbolicate.
Load the dSYM file corresponding to the binary (also known as the “companion file”) that contains the address you want to look up in the debug info in LLDB. The companion file is located at/path/to/dSYMs/App.app.dSYM/Contents/Resources/DWARF/. In this case, we will load it for ARM64, since the crash occurred on ARM64.
Set the load address of the image for which you want to look up a symbol. Here, the app binary image is loaded at address 0x104d10000 according to the loaded images list in the crash report.
Now we can look up any address in the loaded binary from the crash report and retrieve its debug information.

So what is the practical takeaway? Whenever you encounter a crash report that does not make sense or seems incomplete, remember that code might have been inlined and that you are only looking at a part of the full stack trace. When investigating your app crash, make sure to use LLDB on an Xcode-exported crash report to be certain that you have full inlined debug information available.

How hackers use LLDB to cheat with non-jailbroken devices

Leveraging Info.plist Based Certificate Pinning on iOS and Making up for its Shortcomings