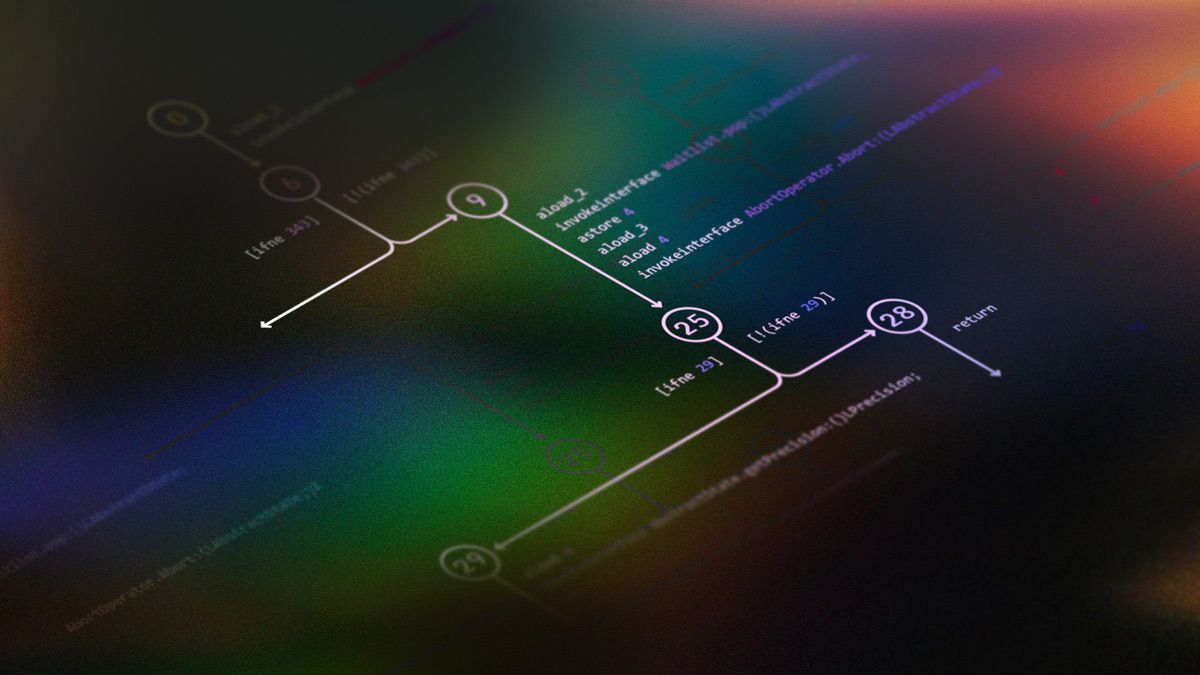 Analyzing software is a common routine in various development stages including, but not limited to, debugging, optimization, safety verification, and security assessment. But it also has many uses outside of development, such as reverse engineering or CTF contests.

Very often, the developer has to answer the question, “Is data from a specific origin accessed from a sensitive location? If yes, how did it reach there?”

Data flow analysis is an essential part of static program analysis. One of its special cases is taint analysis, a problem of determining whether there is any data flow between two points, called the source and the sink, of the program. Taint analysis provides sufficient information for detecting information and control leaks.

In this blog, we introduce the newly added taint analysis feature in ProGuardCORE and provide a brief overview of the data flow analysis framework behind it.

Not getting lost among data flow analysis tools

Before diving into ProGuardCORE, let’s take a step back and consider some important data-flow analysis (DFA) characteristics to compare a few DFA tools.

When evaluating different data flow analyzers, it is important to distinguish features important for your specific area of application. Without going deeply into domain-specific details, we consider three defining DFA characteristics:

The difference between static and dynamic analyses lies in when it is conducted. A static analysis does not require the application to run but it rather abstractly interprets the code to achieve the result. By analyzing the application statically, we can guarantee the result for all possible execution paths and run the analysis just once before the program is shipped.

On the contrary, a dynamic analysis runs with the program and requires either patching or execution in a special environment. Dynamic analysis typically produces less false positives because it never encounters infeasible paths. However, it comes at the cost of having to sacrifice the performance by always running it with the application, or having an unsound result obtained from only analyzing a limited number of test cases.

The table below summarizes the differences between static and dynamic analyses.

Path-dependence is the ability of the analysis to discard infeasible paths and make the result more accurate. Consider the following example:

After executing the code above, the value of y is equal to 1 because exactly one if-branch will be executed, assuming that x is a regular numeric type (i.e., it is either positive or non-positive). The paths when either none or both branches will be triggered are infeasible (i.e., they will never be executed).

However, if the analysis is path-insensitive, it will conclude that y is either equal to 1 or undefined, which would correspond to any value in the conservative interpretation. Thus, path sensitivity narrows down the set of possible values of y from all integers to 1.

Path sensitivity is naturally achieved in dynamic analyses which are performed during runtime and thus cannot go through infeasible paths. For static analysis, exact path-sensitivity is undecidable (as equivalent to the Halting problem), although a partial result is achievable with SMT solvers.

Because an exact analysis cannot be performed in most nontrivial cases, we follow the hypothesis testing terminology and distinguish between two sorts of errors: false positive and false negative.

Conservative analysis tolerates false positives while completely eliminating false negatives. Thus, it produces a result which is reliable for all execution paths, making it suitable for detecting possible automatic optimizations (i.e., it guarantees that the optimized code is semantically equivalent to the original). Worth noting: In the literature, conservatism and soundness are often used interchangeably.

With a refresher in mind regarding key DFA characteristics and tools, and knowing that taint analysis is widely used for detecting vulnerabilities in applications, let’s transition to exploring the latest feature update in ProGuardCORE.

In this section, we consider some well-known analysis frameworks and compare their approaches to ProGuardCORE.

ProGuardCORE analyzes the applications statically without affecting the runtime, unlike TaintDroid, which requires instrumentation of the Dalvik VM to track taints. Thus, the result covers all execution paths and does not have to be run every time the application is launched.

Path-dependence is naturally expected from dynamic analysers since they consider only feasible paths, whereas static analyzers have to apply an approximate technique. For instance, the tool Hopper derives the feasibility information in its goal-directed analysis. This is currently unsupported in ProGuardCORE, but adding a predicate analysis for excluding some obvious infeasible paths can be achieved naturally due to its extensible architecture.

ProGuardCORE exhibits a forgiving behavior by simply ignoring the calls it cannot resolve and using a default unsound approximation of library calls. This guarantees construction of an informative analysis result that illustrates the execution path in case of a data flow detection. The opposite conservative example is Amandroid, which does not analyze the native code but rather overapproximates it by assigning all data structures reachable from a native method and unknown value.

FlowDroid is the most similar tool to ProGuardCORE judging by the aforementioned analysis features. However, there is a significant difference in architecture: FlowDroid is a taint analysis tool and is not designed to be used for other purposes. On the contrary, ProGuardCORE benefits from the more general configurable program analysis (CPA) making it easy to extend with other types of analyses.

This difference is visible in the interprocedural analysis performed by both tools. FlowDroid uses a graph representation for its method summaries, which fits well the binary content of the taint analysis. ProGuardCORE, however, follows the block-abstraction memoization (BAM) approach, storing the analysis results for each context-call pair. This technique is domain-independent and thus allows analyses with more informative abstractions, like predicate analysis.

The preparation for data flow analysis in ProGuardCORE consists of three steps:

Since taint analysis is the only currently available data flow analysis method, it will be the focus of this tutorial.

A control flow automaton arranges the bytecode into a graph structure easing traversal along execution paths. To create this model, we first need to come up with the program we will analyze. For simplicity, we use a string representation rather than reading from a jar file:

In our example, the taint goes to the sinksink(String s)sensitive to its only argument through a call tocallee()from the taint sourcesource()returning a tainted value. The actual code of the source and the sink is not relevant for us because we define their semantics separately in the next section.

Now we need to get the ProGuardCORE program class pool:

Next, we create the intraprocedural CFA with CfaUtil:

Now we can see ProGuardCORE in action. As we mentioned before, ProGuardCORE supports taint analysis by tracking the data flows from taint sources to taint sinks. A taint source is a method which returns the taint or applies it to its arguments, calling instance, or static fields. For simplicity, we create a taint source returning the taint:

Our source is the methodsource()from classAreturning a tainted string. The third booleanTaintSourceargument defines whether the return value should be tainted.

A taint sink is a method call which is sensible to the taint. It can access the tainted value through its argument, calling instance, or static fields. Below, we create a taint sink which accepts the taint as its first argument:

The taint sink is the void methodsink(String)from classAwith its only argument sensible to the sink, as one can see from the thirdJvmTaintSinkargument. Note that the argument enumeration starts with one regardless of whether the method is static. This is different from Java byte code convention, which has the calling instance as the first argument for non-static methods.

Setting up the analysis run

The CPA algorithm is encapsulated in theJvmTaintMemoryLocationBamCpaRunclass. It requires a CFA, the taint sources, and sinks for its work. Now we have everything we need:

We provided the constructor with the components we already had, the entry point method signature, the maximum call stack depth (-1 stands for unlimited), and the cut-off threshold for the trace extraction telling it that we are not interested in empty taints.

We can now run the analysis and obtain the traces:

The resulting set contains only one trace, as expected. We can now take a look at its string representation:

The format of the trace is a sequence of memory locations going from the sink to the source. Each memory location consists of a description where it takes place (at the operand stack, the local variable array, the static memory, or the heap) and a program point (method and offset) it refers to.

Our trace consists of two memory locations, both at the top of the stack but in different methods. The first memory locationJvmStackLocation(0)@LA;main()V:3corresponds to the first argument of the methodsink(String)which is also the return value ofcallee().

The second memory locationJvmStackLocation(0)@LA;callee()Ljava/lang/String;:3is the return of the taint sourcesource(). Thus, the trace covers the whole path between the taint creation and consumption.

This tutorial is also available in Java in the ProGuardCORE manual.

Writing your own analysis in ProGuardCORE

The taint analysis is not the only possible analysis achievable with ProGuardCORE. One can relatively easily extend the existing framework with their own analysis. The first step is to create your ownAbstractState. This requires finding a proper representation of the information you are going to track, defining a semi-lattice on it, and specifying the transfer relation for your analysis. The latter can be forked from the existing defaultJvmTransferRelationby overriding its methods encapsulating the instruction and call semantics.

The taint analysis in ProGuardCORE can be applied to detect various vulnerabilities related to data in code. They include, but are not limited to:

Thus, using taint analysis with well chosen sources and sinks can help find potential threats in already compiled code and reduce the security assessment effort significantly. Note that since the analysis is forgiving, an empty result does not necessarily mean the absence of a data flow; it only excludes some straightforward possibilities. And this also applies the other way: If there is a data flow detected, the trace may still be infeasible due to path insensitivity and may never actually occur during the program execution.

There is a broad range of data flow analysis tools, each with their own feature set and specific applications. In this post, we considered three fundamental characteristics to help distinguish them. Thus, we divided all analyses into:

The ProGuardCORE data flow analysis feature includes a working interprocedural taint analysis and an extensible framework for other analyses. It is:

The tutorial shows how to analyze an application starting from the definition of taints, modeling the control flow with a control flow automaton, and finally interpreting the witness traces.

Check out the ProGuardCORE manual to review this tutorial in Java, as well.