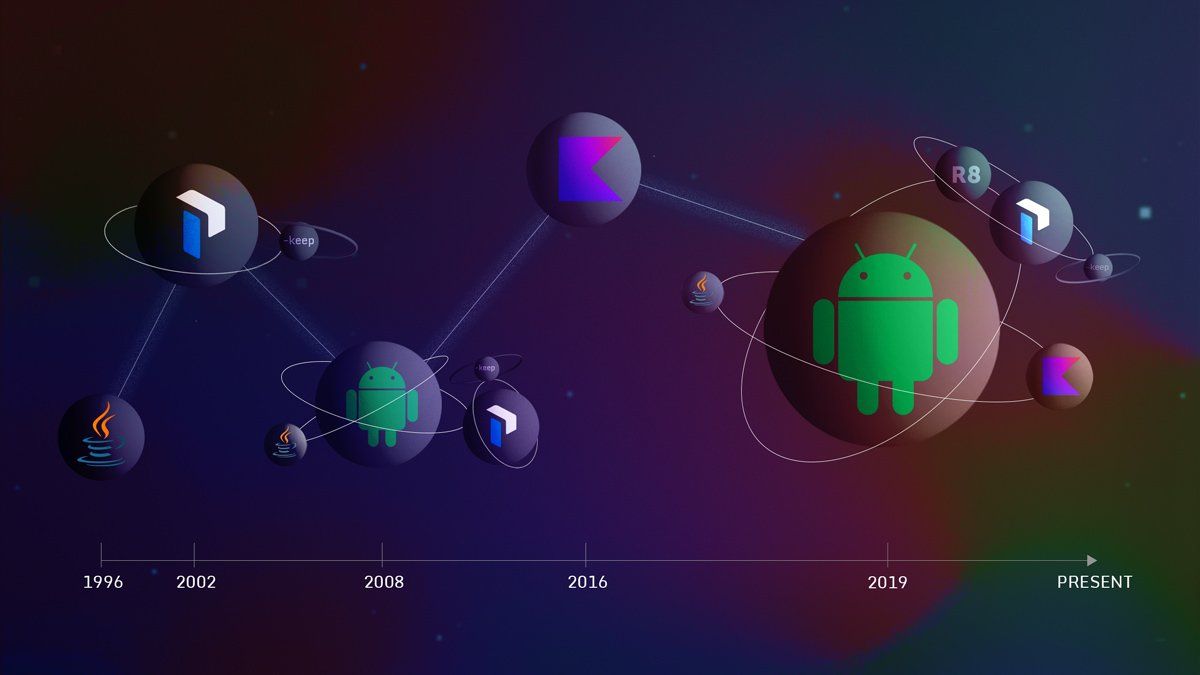 Kotlin is relatively young – only 11 years old – and Android has only had official support for Kotlin for five years. Yet Kotlin is now the go-to language for Android development, and is becoming more popular for desktop and server application development. Kotlin is used by over 60% of Android professional Android developers and it's estimated that 1 million professional software developers use Kotlin as 1 of their 3 primary languages.

Clearly, we are truly in a new age: the Age of Kotlin.

ProGuard in the Age of Kotlin

ProGuard, which turns 20 this year, was originally created in the era of Java 1.4, Java Applets, J2ME and Sun Microsystems. Though Kotlin was designed to be interoperable with Java from the start and designed to run on the JVM, much has changed in 20 years. Kotlin is a much more modern language which has many features that Java does not.

In this post, we’ll dive deeper into one section of the Droidcon presentation: the complications of writing keep rules for Kotlin code. You’ll learn why you need to think in terms of Java when writing keep rules for Kotlin code, using examples from the Droidcon London 2021: Keep Rules in the Age of Kotlin ProGuard Playground; you’ll also find the answers to the playground challenges there.

What is a keep rule anyway and why do we need them?

ProGuard, and similar tools like R8 and Redex, aim to shrink and optimize code as much as possible. One shrinking and obfuscation technique that can cause issues is the renaming of identifiers, such as class names, methods or fields, to shorter names (which obfuscates names while also making apps smaller). This can lead to problems when using reflection to dynamically access classes or members at runtime.

Consider the following Java class that contains a field namedmyFieldand uses reflection to access the field by name:

If a shrinker, like ProGuard, renames the field to some shorter name (a, for example) then getDeclaredField(“myField”)will no longer work.

Though this case is simple, the field name could be generated dynamically at runtime. For example, libraries such as jackson rely on reflection to map JSON to model classes, so we need a way to tell ProGuard “don’t rename or remove this field”. In other words, we need to tell ProGuard to keep the field!

So, if we have a fieldmyFieldin a class namedReflectionthat we want to tell ProGuard to keep, we can express this with the following keep rule:

ProGuard introduced keep rules 20 years ago, and they are now the de facto standard in the Android world; in fact, they are also used by R8, Redex and DexGuard. ProGuard keep rules were originally designed for, and inspired by, the Java class file format which explains why the rules look suspiciously like Java signatures (and why they don’t look like Kotlin signatures!).

ProGuard keep rules also support various wildcards, and alongside other configuration rules make them a very powerful tool for configuring ProGuard. A good place to get started is the ProGuard manual, along with the ProGuard Playground, which helps visualize the classes, methods and fields in your app that are kept or not by keep rules.

Kotlin compiles to Java bytecode and is interoperable with Java, so there shouldn’t be any problem writing keep rules … in theory. But Kotlin is not Java – what you write in Kotlin code and what comes out of the Kotlin compiler can seem disconnected. And you need to write keep rules for the latter, not the former, since shrinkers operate on the Java bytecode!

In Java, all declarations must be within a class, even a simple “Hello World” application needs a class declaration. Kotlin, in contrast, supports top-level declarations. For example, in the following Kotlin file,Main.kt, a top-level constant, a property and main function are defined:

If these declarations are not in a class, how can we write a keep rule for such top-level declarations given that all keep rules need a class name, or at least a wildcard matching a class?

Of course, since Kotlin compiles to Java, there is an actual class introduced behind the scenes! Such classes (known as file facades) take on the name of the Kotlin file with the suffixKt. In this case, a class file is generated namedMainKt.class.

So, we now know how to write a keep rule to keep the file facade class:

But what about the main function? Surely it’ll be simple?

If you compare the keep rule below, which seems reasonable when thinking in terms of Kotlin code, with the actual methods in theMainKtclass, you’ll notice that the keep rule doesn’t match eithermainmethod generated by the Kotlin compiler.

Remember, we need to write keep rules in terms of the compiled Java class files, not Kotlin code. An additional reminder: the main entry point for the JVM has the signaturepublic static void main(java.lang.String[]).

The Kotlin compiler generates a syntheticmainmethod that has the correct signature, which delegates to the secondmainmethod without parameters (also notice that the Kotlinkotlin.Unittype becomes the Javavoidtype). Therefore, a keep rule that keeps the main Kotlin function would be:

We’ve already seen how a return type ofkotlin.Unitcompiles to a Javavoidreturn type, but what about when a function has a parameter of typekotlin.Unit? And how about other Kotlin specific types? In the following snippet, we haveUnit,Any,Nothingand some reified type parameters.

In the example above, theprocessfunction has a return type ofkotlin.Unitand the parameter is also of typekotlin.Unit. The return type will compile to void, but the parameter will remain akotlin.Unitparameter! Taking this in account, a keep rule for this function would look like:

Kotlin also has a typeNothingthat represents a value that never exists. This is useful, for example, to tell the compiler that a function never returns because it always throws an exception, like thefailfunction in the example above.

So if it never returns, the compiled Java return type would bevoid, right? Well … almost! Under the hood, the Java method actually returns the wrapper typejava.lang.Void! So a keep rule would look something like:

Kotlin companion objects are singleton objects tied to a class but not a specific instance of a class. In this way, they provide a similar feature (though not the same) as Java static methods. Companion objects can be either unnamed or named, and they can contain property and function declarations.

It begs the question: if a companion object is not a class and it has no name, how can we write a keep rule for it?

As before, we must think in terms of Java class files and not Kotlin code! The important thing to know about companion objects is that they are compiled to Java inner classes using the nameCompanionor their specified name (MyCompanionin theBarexample above).

As a reminder, the naming convention for compiled inner classes in Java combines both the outer class and inner class names using the dollar symbol as a separator (e.g.OuterClass$InnerClass).

So the companion class ofcompanion.Foowill be compiled to a class namedcompanion.Foo$Companion. This means that a keep rule to keepcompanion.Foo’s companion would look like this:

We’ve already seen one type of object – the companion – but object declarations allow the general declaration of singleton classes. For example, theLoggerclass in the example below declares a singleton logger and looks similar to how you would create such a class in Java containing static methods for different log levels.

As usual, if you want to keep theLoggermethods, you need to know what it looks like when compiled to a Java class file.

First, the easy part: an object declaration is compiled to a class of the same name.

But, this keep rule won’t work! An important thing to know for object declarations is that the methods are instance methods.

Under the hood, the Java class also contains a fieldINSTANCEwhich holds a singleton instance; all calls to these methods, even though they look like Java static method calls at first glance, are calls to these instance methods on the object in theINSTANCEfield. This means that the keep rules should not include the static modifier:

Kotlin, unlike Java, allows adding new functionality to existing classes without using inheritance. This is achieved via the use of extension functions and properties – they allow extending any class, including classes from the Kotlin runtime library and third-party libraries. The following example shows extensions on theStringclass:

Given that functions or properties can be added to classes that you don’t even have the source code for, how do they get compiled? And how do we write keep rules for them? Like this?

Of course,java.lang.Stringis a Java library class, and a shrinker won’t (and can’t!) touch it, so writing such a keep rule doesn’t make sense (ProGuard will actually warn you about keep rules for library classes). The important thing to know about extensions is that though they are compiled to Java methods like any other Kotlin function, they have an extra first parameter for the receiver object (which is an instance of the class or property that is being extended).

For example, the String extension functionfooin the example is compiled to a Java method with the signaturejava.lang.String foo(java.lang.String). Using this knowledge, combined with what we’ve already learned about top-level declarations (and given that the function is in the fileextension/Ext.kt), we can craft a keep rule to keep this extension function:

Kotlin was designed with Java interoperability in mind, so it’s natural to call Kotlin code from Java. But there are some differences between Kotlin and Java that require some attention so Kotlin provides a way to tweak the generation of Java code using annotations.

In the following example, three annotations are used:

Given that@JvmNameis used to change the name a keep rule is straightforward, simply use the name specified in the annotation:

For@JvmOverloads, presumably, when keeping this function all overloaded versions should be kept. This is easy to do with the...wildcard, which means “any number and any type of parameters”:

For@JvmStatic, a static method is created in the outerjvm.MyClassclass that delegates to the companion method. A keep rule for this is simply:

We’ve seen how, in the Age of Kotlin, writing keep rules is not always easy or intuitive. It requires some understanding of how Kotlin code is compiled to Java class files but the task is made a lot easier with the help of the ProGuard Playground.

Every example in this post, including solutions to the challenges with embedded playgrounds, can be found in the Droidcon London 2021: Keep Rules in the Age of Kotlin Playground – have a look and play around with the keep rules yourself

Remember: you need to write keep rules in terms of the compiled Java class files, not Kotlin code!

We also mentioned that writing keep rules is not the only complication brought about by Kotlin – to find out more, watch the full Droidcon London Keep Rules in the Age of Kotlin presentation, and keep an eye out for our upcoming deep dive into the security implications of Kotlin assertions.

Do you have any Kotlin keep rule tips of your own?

Let us know on the Guardsquare community!